Welcome to the first leaf miner site newsletter - an informal arena for discussion/notes etc -  hopefully stimulating contributions from others as well.

With the end of Summer time and the first frosts appearing, it seems appropriate to look at fallen leaves for signs of leaf miners. An uncommon lepidopterous miner is Ectoedemia argyropeza. It forms characteristic green islands, which are easily seen in the leaves of Aspen (Populus tremula).

The larva can extend its feeding period by forming these green islands. One theory I read about recently was that the islands are formed in response to hormones secreted by the larvae, which delay senescence of the leaf, but this was an old article and there may be further theories on this phenomenon.

Interestingly David Manning found the early stages of the lepidopterous miner, Ectoedemia intimella in the summer in leaves which had prematurely fallen off the trees, presumably in response to drought stress.

By dissecting out the leaves with green islands he found the larvae in the leaf midrib. The leaves appeared as below. (Something to look out for next Summer). 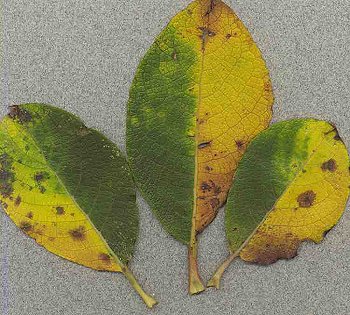 The miner is usually seen now in Salix species (Willow) and hides in the midrib of the leaf:

Several of us will be attending this exhibition and we'll run the website from CD on a laptop. Hope to meet some of you there?

Have you some problem mines you would like others to comment on? Perhaps this could provide a forum for some of these. Send me your problem mines and I'll post some up in future newsletters.

I  have two photos of miners on Sweet Chestnut - what do you think they are? You can reply to me and I'll post the results up - or to the subscribers to the updates by doing a 'Reply all' posting.